Mardi Gras through the eyes of a Jewish Princess

©Michael Barnett
First published in the Australian Jewish News 5 March 1999. The float organisers had intended the "Jewish Princesses" to be a mixed gender entry, however for a variety of reasons no women participated on the day.  The 14 male participants were from Melbourne, Sydney and Israel.


I was a Mardi Gras virgin in 1998, previously only ever having witnessed this eye-opening spectacle from the safety of my family's lounge-room television in the Melbourne suburb of Doncaster. In fact the very first time I watched the Mardi Gras parade on television I was terrified my family would label me gay by association. 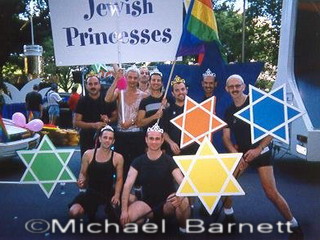 Since then I have come a long way as an individual, having come to terms with my sexuality and identifying as a gay man - a Jewish gay man. Some people I know turn against their Jewish identity in the process of their 'coming out' - the discovery or awakening of their sexuality. Instead for me it was a bringing together of two cultures and two communities and a way of life I knew was right for me. No longer would I live a life I knew was a lie - to my family, to my friends and most importantly to myself.

I consider myself enriched for having travelled this path, denying myself neither my Jewish heritage nor my intrinsic sexual self. If I continued along the path of self-denial my being would have shrivelled up and died but instead I have travelled the path of the caterpillar and transformed myself into a beautiful butterfly.

And through this transformation I have vowed to myself that I would do as much as possible to provide an acceptable path for other people to follow who find themselves in a similar situation to myself.

It was during the Mardi Gras parade last year as I watched it pass by in all its spectacle of light, colour, sound, diversity of sexual expression and pride that I decided it was time for a Jewish entry in the parade. This was to be an entry of Jewish pride, for gay men and women, their friends, families and supporters. 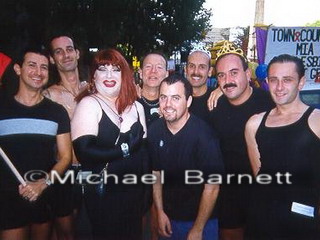 Thus 'Jewish Princesses' was born. Just as the gay community has its twinks, muscle Marys, leather men, bears and so on, the Jewish community too has its 'sub-cultures'. And what better one to identify with than the Jewish (Australian) Princesses. She is a Kugel, a Bagel, a maidel and now a faigel. She is so wonderfully Jewish that it was the obvious choice.

Having spread the word far and wide I gathered together a group of people to march in the 21st Mardi Gras parade in Sydney, February 1999. Purely by coincidence the entry comprised of fourteen gay men and the straight brother of one of the gay men, marching in support. I would have liked to have seen our entry and the Jewish lesbian entry unified in solidarity - perhaps an ideal for Mardi Gras 2000.

Walking along the parade route was the culmination of several months' hard work not only by myself but from a dedicated group of my peers - without whom this would not have been possible. I was holding my rainbow Magen David high with pride - for myself, my family, my friends and most importantly for the people I knew it would mean the most to - the Jewish men, women, boys, and girls, married and single who know in their hearts that they have a place in the Jewish community and equally in the gay community and can be proud of both without fear of prejudice.